With habitat restoration and declaration of the Ormož Basins as a nature reserve we have been bestowed an international award – the restoration project is ranked among the finalists of this year’s Natura 2000 Awards. 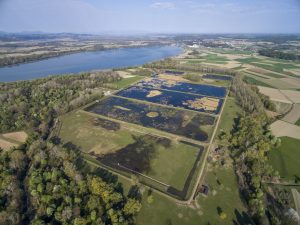 The Ormož Sugar Factory began to operate in 1979. Waste waters rich with nutrients, which were accumulated in the nearby wastewater basins, quickly attracted numerous waterbirds, as the basins constituted an optimal feeding site for them. In the 1990s, the Bird Watching and Bird Study Association of Slovenia (DOPPS) and the Ormož Sugar Factory (TSO), the majority owner of which was the Dutch company Cosun, carried out with joint efforts few nature conservation campaigns in the basins of the Ormož Basins, among which let us highlight the setting up of breeding sites for the Common Tern and the Black-headed Gull – construction of first breeding rafts.

In 2006, the Sugar Factory was forced to shut down owing to the EU reforms. In spite of it, its management did not shut the door to nature conservation and the most important residents of the Ormož Basins – birds. In 2010 they decided to donate the area of the basins (60 ha) to DOPPS, while we made a commitment to establish a nature reserve and to take care of birds in the future. We successfully acquired LIFE funds, with which we were able to restore the habitats, establish a new inflow of water and began to implement an adaptive conservation management of the area.

»Some of us, the ornithologists, literally grew up with the Ormož Basins, well aware of what they meant to birds, their migration, and Slovenia itself. When they were faced with ruin, we invested all our efforts and put at stake many things in order to save them. I know that our determination and sincere intentions were recognized by the owners, and our dreams could thus become a reality. The path to the reserve, however, was still long and anything but easy, « said Damijan Denac, Director of DOPPS and Head of the basins restoration project.

In the Ormož Basins Nature Reserve you can now observe, in reed and bulrush stands and other target habitats several breeding Ferruginous Ducks and, once more, flocks of Wood Sandpipers. The area is a component part of Natura 2000 site »Drava« and has become one of the most important breeding sites and migration stops for waterbirds in Slovenia. At the same time, grazing Water Buffaloes have created one of the largest complexes of extensive pastures in the Lower Drava Region.

This year the European Commission awarded us with a special recognition by ranking the habitat restoration project at Ormož Basins among the finalists of this year’s Natura 2000 Awards. In the »Nature Conservation« category, the Commission placed us side by side with another seven projects from the entire Europe, but it will be YOU who will choose the best project!

Damijan Denac: »With this particular project we have shown an alternative to the outdated concepts. We have preserved nature and dedicated it to educational purposes. We have created jobs and helped making the Ormož Municipality, the entire region and Slovenia more recognizable. All this is of public interest. On top of it we paid more social transfers and taxes than what the state has invested in our project. Apart from it, we therefore even filled the budget a little more. Let your vote for this project be also the message that today’s global problems – climate crisis, biodiversity crisis, “new diseases”, etc. – cannot be solved in the same ways that actually caused these problems – through infinite exploitation of nature.”

Click on the photo below and cast your vote for the Ormož Basins Nature Reserve and its inhabitants.